The University of Stirling (Scots: University o Stirlin, Scottish Gaelic: Oilthigh Shruighlea (abbreviated as Stir or Shruiglea, in post-nominals) is a public university in Stirling, Scotland, founded by Royal Charter in 1967. It is located in the Central Belt of Scotland, built within the walled Airthrey Castle estate. Since its foundation, it has expanded to four faculties, a Management School, and a number of institutes and centres covering a broad range of subjects in the academic areas of arts and humanities, natural sciences, social sciences, and health sciences and sport.

The University campus is approximately 360 acres (1.5 km2) in size, incorporating the Stirling University Innovation Park and the Dementia Centre. The campus, with its wildlife, loch and mixture of native and exotic flora are located in the foothills of the Ochil Hills and is often cited as among the most beautiful in the UK. In 2002, the University of Stirling and the landscape of the Airthrey Estate was designated by the International Council on Monuments and Sites as one of the UK’s top 20 heritage sites of the 20th century. The institution also occupies buildings in the city of Stirling. The University attracts students from a wide range of backgrounds, with more than 14,000 part-time and full-time students enrolled in the 2020/21 academic year.

Stirling has international degree programme partnerships in China with Hebei Normal University, Singapore with Singapore Institute of Management, and Oman. The University offers a MSc in Human Rights & Diplomacy, this is the only Human Rights and Diplomacy programme in the world taught in partnership with the leading training body of the United Nations: the United Nations Institute for Training and Research (UNITAR). 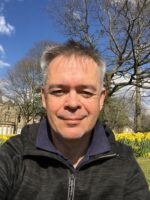 Iain MacRury has taught advertising for many years at several institutions in the UK. He is currently Professor of Media and Communications in the Division of Culture Media and Communications at the University of Stirling. Scotland. Many of our students on Film and Media, Journalism, PR, Media Management and Digital Media Communications courses study advertising and a variety of related forms of communication. Iain is currently teaching both undergraduate and postgraduate courses in advertising including an extension module in Singapore. Iain is the author, co-author, and editor of several books, including The Dynamics of Advertising, and two editions of the Routledge The Advertising Handbook.

Iain has also worked as a consultant for several brands (including Brands including BMW, Motorola, Diners Club and HSBC) His interest has been in binding creative and insight-led research inputs to support creative communications. Iain is a trained organisational consultant has a current interest in the organisation and reorganisation of advertising processes in the context of digitalisation. This extends into explorations of branded content and the challenges associated with protecting and regulating media communications in a disrupted media sphere. Iain is currently co-editing The Handbook of Digital Advertising. for Routledge (2023)..

Other teaching, research and cultural interests include humour, sports, and psychoanalysis. He has written on stand-up comedy and recently co-authored two papers on the emotional outfall of Brexit. He has also co-authored a psychoanalytic study of Doctor Who.

He recently relocated to Scotland after several years living in London and the south of the UK.